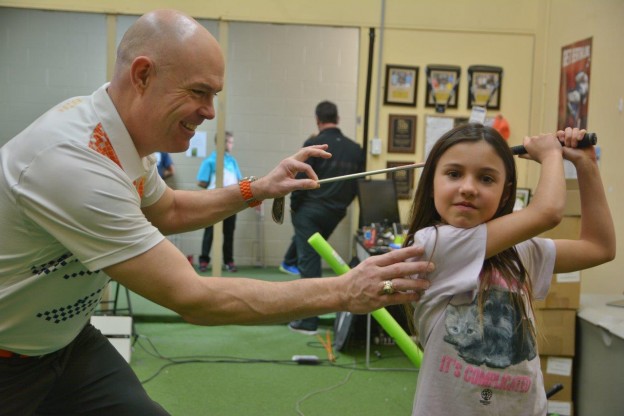 As it says in the blurb at the bottom of this column, I co-host a weekly television show on the local Rogers community channel here in Toronto. We have some really amazing and many well-known guests on our show, and I love doing it each week. But if I gave an award to the Most Entertaining Guest we’ve had, over two seasons, and over 200 interviews, it’d have to go to Vanessa Borovilos.

If you didn’t watch the show, or read the local sports pages (such as they are today), you wouldn’t know Vanessa… but she’s a lovely 8-year-old young lady pictured here with her coach, Doug Lawrie, who brought fame and recognition to herself and to junior golf in Ontario by qualifying for the first-ever National Drive, Chip and Putt Competition at Augusta National Golf Club last April. Against huge odds, and a lengthy qualifying process, Vanessa finished 4th overall in her age group at Augusta last Spring, and won the driving competition. I just had to have her on our show.

Just to be safe, I also invited Doug Lawrie, to accompany her. In rare cases when we have two guests, my charming co-host Helen Burstyn, or I, back out of the interview. So in the case of Vanessa and Doug, it was just me asking the questions.

Over the years, I’ve had some tough interviews, but these have usually been because the interviewee was too talkative, too controversial, too rude, or just in a bad mood or tired. Vanessa was none of these. She was just, shall we say, quiet.

Deeks: So Vanessa, tell me what it was like to be at The Masters?

Deeks: And what was the Drive, Chip and Putt competition like… were you nervous… were the other kids pretty competitive?

Deeks: Tell me about the experience of being at Augusta, one of the most beautiful courses in the world?

You get the idea. Thank God Doug Lawrie was there, because he’s very chatty and brimming with enthusiasm for teaching golf to young people. (His Focus Golf Group, based in Burlington, is justifiably recognized for its work with young golfers. See more here: www.focusgolfgroup.com.) Doug filled in a lot of blanks left hanging in the air by Vanessa, described the competition and how Vanessa did in each category.

While Doug was chatting, though, Vanessa – hardly intimidated to be in a TV studio, or overwhelmed by the lights and cameras – yawned, spun in her seat, put her arm up over her head, and looked all around the studio. It was all I could do to keep myself from bursting into hysterical laughter, and I could see Doug trying hard to keep track of what he was saying to me. Please understand, I’m not being critical of Vanessa at all, I found it delightful and refreshing that such a youngster wasn’t the least bit phased or impressed by all the attention. Interviewing her was a challenge that I relished, and I’d gladly have her on the program again.

And, in fact, that may happen… Doug sent me an email last week to tell me that the little Tiger had just gotten through the third stage of qualifying for the 2016 DC&P Competition, indeed winning that stage. It was held at one of the toughest courses in the US, Oakmont CC in Pittsburgh. Here’s the text of an email from Vanessa’s Dad, Dino, to Doug:

“She started 7th out of 10 competitors.
The drives were into a brisk wind from the left, little up hill into some rough. She pushed the first one a little right, within the fairway. The next two went down the middle. She tied for first with 21 points.
The chip shot was fairly difficult out of rough to a slight uphill, right to left tilt that levelled off before the hole. She leaves her first two chips just outside 4 feet short of the hole. Adjusts and gets the next one to 3 feet. Finishes 2nd with 35 points.
Sinks the 6′ downhill putt.
Lips the 15 footer to about 15″.
Steps up and makes a perfect 30′ putt that dies into the hole to clinch first place with 65 points. The crowd cheered.
She showed a lot of emotion and a hard fist pump.
Tracey was almost crying. (mom)
Vanessa waited anxiously and survived three more competitors.”

I was almost crying when I read this. With this victory, Vanessa has now qualified to get back to Augusta. Doug says she’s worked her butt off this summer to gain driving distance and accuracy, and is determined to succeed.

Something tells me that this little dynamo is going to need media training in her future.