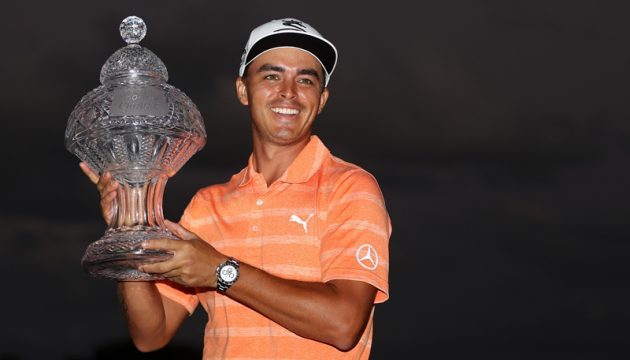 PALM BEACH GARDENS, Fla. – Rickie Fowler made it interesting Sunday for as long as it took him to make two big putts to pull away in the Honda Classic.

Staked to a four-shot lead, Fowler hit one putt into a sprinkler hole, hit a tee shot into the water and watched a big lead shrink to one over Gary Woodland early on the back nine. Fowler answered with consecutive birdie putts of 40 and 25 feet and closed with a 1-over 71 for a four-shot victory.

“If I don’t make those putts, I’ve got a pretty tight race,” Fowler said.

Instead, those chasing him had the biggest problems with the closing stretch at PGA National.

Fowler effectively ended it with a shot over the water to the 3 feet that stretched his lead to five shots with two holes to play. Woodland appeared to have second place wrapped up until he three-putted the 17th, and then tried to lay up on the par-5 18th and came up short into the water. He closed with another bogey for a 69. He had to share second place – the difference of $128,000 – with Morgan Hoffmann, who missed a 4-foot birdie putt on the 18th.

PGA champion Jimmy Walker was lurking on the fringe of contention until tee shots into the water on the 15th and 17th holes, which cost him five shots.

Tyrrell Hatton of England, who played in the final group in his first PGA Tour event in Florida, was out of the picture quickly. He still had a chance to finish alone in second, which would have gone a long way toward securing a PGA Tour card, until missing a 3-foot birdie putt on the 17th.

Fowler even got into the act when it no longer mattered. He hit his tee shot into the water on the 17th hole and made bogey, then hit a wedge into the bunker on the 18th and closed with another bogey to finish at 12-under 268.

All that mattered was the trophy, the fourth of his PGA Tour career.

Fowler jokingly referred to it as a “small collection” on Saturday evening, though it was important. He had gone 13 months and 25 starts worldwide without a victory as everyone around him was winning multiple times.

It was his first PGA Tour victory since the Deutsche Bank Championship in September 2015.

“I guess I can already plan on Hawaii for next year,” Fowler said, referring to the Tournament of Champions at Kapalua. “I can relax a little bit. This just lets us chill out in a way. There’s less pressure, less stress. I think this is something we needed going into Augusta. I like this spot we’re in right now.”

Fowler won with the lead last year in Abu Dhabi and in 2011 when he won the Korea Open, but it was the first time in five tries he converted a 54-hole lead on the PGA Tour into a trophy. In all five rounds with at least a share of the lead, he has shot over par.

A four-shot lead, which he built with two late birdies Saturday afternoon, allowed him to play smart and safe.

It just always didn’t work out that way.

He went over the green on the par-4 fourth and tried to putt it up the slope, except that it went into a sprinkler hole and led to bogey. Two holes later, Fowler hooked his tee shot into the water on the tough par-4 sixth and made double bogey.

He bounced back with a 30-foot birdie putt on No. 8, only to drop another shot on the ninth.

Woodland hit wedge into 4 feet on the 13th for a birdie to get to 10 under, suddenly one shot back of Fowler. And just like that, it was over. Fowler leaned over on his putter as he watched his 40-foot on No. 12 drop into the cup, and while he went long with a wedge on the 13th, he dropped that one in from 25 feet for birdie.

Woodland had reasonable looks at birdie over the next four holes and couldn’t get any to drop. He powered his 20-foot attempt on the 17th about 6 feet by the hole, ending is last hope.

“I thought all of them looked pretty good,” he said of his birdie chances. “It was a little deflating on 18. Thought I hit a pretty good drive and thought I would have a chance, and I just couldn’t get home and laid up in the water, which was bad.”

Hoffmann tied for second, his best finish ever on the PGA Tour.

Jhonattan Vegas made a hole-in-one on the 15th hole and closed with a 64 to tie for fourth.

Fowler’s victory and Woodland’s tie for second knocked Charles Howell III and Hudson Swafford out of the top 10 in the FedEx Cup standings, keeping them from qualifying for the Mexico Championship next week, the first World Golf Championship of the year.