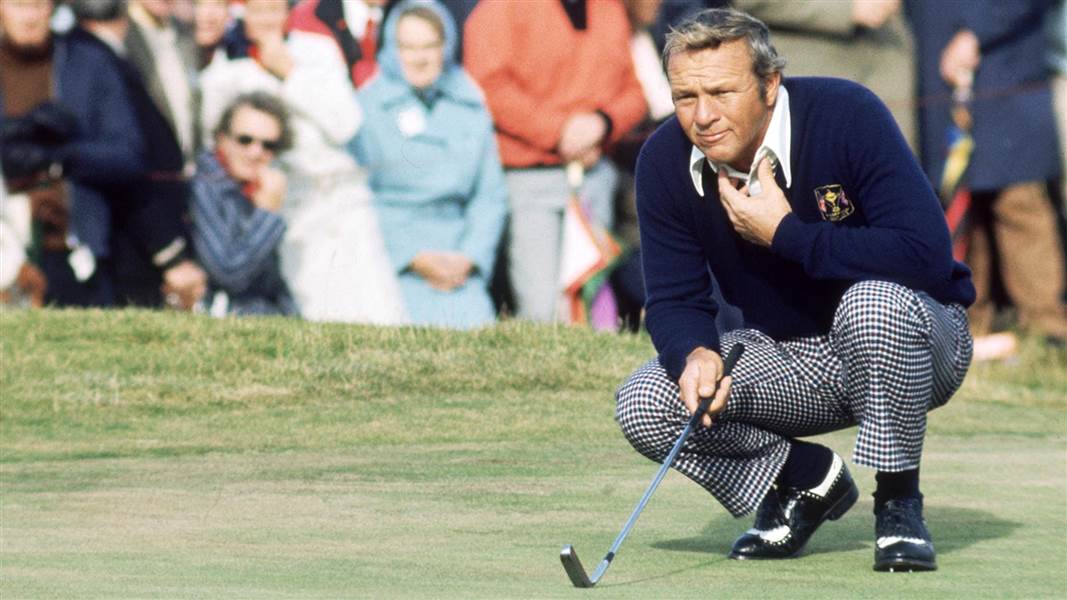 Further to last week’s drivel on my difficulties with “the flat stick”, a few other changes to The Art of Putting occurred to me, and made me think I have another column here.

Over my 60 years of playing golf (starting as a toddler at the cottage in the summers), I’ve watched with interest as so many things have changed in this aspect of the game alone.  And yet, for all the so-called advances, I don’t think anyone – pro or amateur – is a fundamentally better putter than he or she was in the mid-50s, or, I suspect, since Ouimet beat Vardon and Ray (see: Man Bites Dog, Brookline, 1913).

But let’s look at the changes just in my lifetime.

60 years ago, most people would have carried in their bags one of three models of putters, as I remember.  The most popular was the Acushnet Bulls-Eye, usually brass in tone, with a unique shape that included a little fat swirl behind the shaft.  There was the Spalding Cash-in, which looked like a small, silver cocktail weenie on a stick.   And the Wilson 8802 model that Arnold Palmer and Billy Casper favoured, which was basically a curved blade with a back flange, with a profile reminiscent of early hockey sticks.

I’ve used all three of those models over the years.  None of them sank any more putts than the others.  Although, I will say that I remember putting my best in the late 60s when I used a Cash-in, onto which I had applied a square rubber grip.   Somehow, that square shape in my hands gave me confidence (which is 90% of good putting), and I was pretty deadly with it for a few seasons.  But then, for some inexplicable reason, the USGA BANNED square grips.  As I played in a few club tournaments back then, I had to abandon my trusted weapon, and go back to missing everything with my Bulls-Eye.

A then-unknown company named PING came along and revolutionized green-work by introducing the strange and rather mechanical looking Anser putter, in the early 60s.  Aside from offering a much larger putting blade, the Anser looked so machine-crafted (as opposed to grinder-milled) that it made people think it would bring the perfection of science to their strokes.  And I suppose it did, because everyone bought one.

For a few weeks, in the 80s, half the world went out and bought putters with really big heads after Jack Nicklaus won one of his last majors with one of these ungainly models.

I haven’t seen one of these used in three decades, so I guess the bigger-is-better theory was shot down faster than Snoopy on the doghouse.

In 21st Century golf bags, you’ll find many variations of the PING design, made by many manufacturers, if not original Ansers themselves.  About a decade ago, Annika Sorenstam started a craze for the Odyssey two-ball putter, based on her contention that the shape of two extra balls behind the real ball focused her concentration, or something.  (I’m currently using that one myself.  Hasn’t helped.)

And back on the science trend, most “new” putters today look like mini erector sets, but bigger than your iPhone, some with little screws at the back that are shaped like rocket fins, rather like the 1959 Cadillac.  Even Odyssey has added these fins to one of its two-ball models, I guess to remind the user that accelerating through the ball is key, like coming off the ramp onto the highway.

And, of course, serious golfers now keep their putter heads warm with oversized putter covers.  That is, until they forget them at the side of the green, and have to retrieve them from Lost & Found a month later when they notice they’re missing.

I wonder where it’s all going.  And I wonder if at some point, perhaps when someone important wins the Masters or the US Open with a Bulls-Eye, whether there won’t be a stampede back to the instruments that worked so well for Jones, Snead, Hogan, and Palmer.  And perhaps, in its infinite wisdom, the USGA will give me and thousands of other lousy putters a chance to regain former glory by repealing the square-grip ban.

The fact is: the art of putting consists simply of striking a flat surfaced instrument upon a stationary, round, dimple-surfaced orb, in an accelerating arc toward a pre-ordained direction that may or may not have been judged correctly.   That’s all it takes.

And a Model-T will still get you to the same destination as a Tesla, as long as you drive it properly.