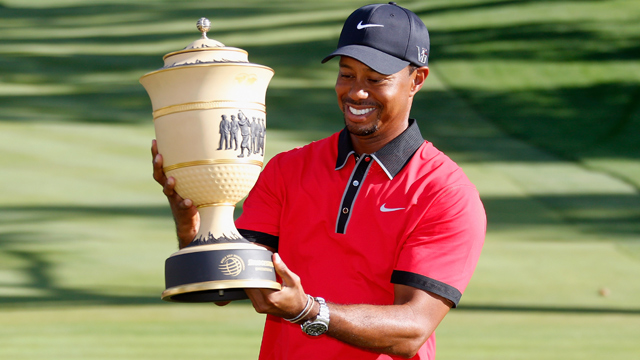 Many players, including this year’s RBC Canadian Open winner Dustin Johnson, were hitting wedges and short irons on their second shot to par 5’s at Glen Abbey and eagles were plentiful. Tommy Fleetwood made three eagles during the first round alone. Is the venerable Jack Nicklaus design finally showing signs that it is too short for modern Tour players?

Jim Deeks, Fairways Magazine (@jimdeeks): Just another decent golf course to succumb to a longer ball, better equipment, and better-conditioned players.  There’s not much that golf course owners/managers/architects can do nowadays, but watch the best players hit driver and short-irons into their longest holes.  I was never much of a fan of Glen Abbey, which I’ve played enough times to form a solid opinion but watching a very talented player like Dustin Johnson surgically dismember it didn’t give me a lot of joy.  As I remember, when Trevino won in ’76, he was 8-under.  Johnson beat that score by 15 shots, nearly 4 each day.  Sad.

Michael Schurman, Master Professional / Life Member, PGA of Canada: When Glen Abbey first opened for play it was considered by most people to be a very difficult course. The winning scores fluctuated between 6 and 12 under for many years. Occasionally, there were a few lower until Tiger’s great year of 2000 when he shot -22 but generally, the winning score is -14 to -18 which is basically consistent with the average winning score at PGA TOUR events. The only cause for alarm is when course operators take DJ’s performance as an across the board standard for all levels of play and add length to their course for the average player to endure. The tour is the tour! Viewers pay to see performances that they themselves can’t do.

Dave Kaplan, Freelance Writer (@davykap): Too short and too easy. I’m glad this was the last year it was played at Glen Abbey because the tournament was starting to get super stale there. Zac Blair hit the nail on the head when he described the venue as just OK in a post-round interview. With no real trouble anywhere on the course, Glen Abbey has become a glorified pitch and putt for the tour’s longer players, and that does not translate into very exciting television. Bring on Hamilton!

Hal Quinn, Freelance Writer, Vancouver: The Abbey was only venerated by the RCGA and corporate Toronto, certainly not by the Tour players or by civilians who paid the excessive fees to endure it. The only aspects that recommended it were its proximity to Bay Street and its adequate space for corporate boxes and TV trucks. Back in the old equipment days the ‘design’ only suited Jack’s high fade with low irons. The new equipment (and swings) rendered it passé a long, long time ago. Bring on the bulldozers.

Peter Mumford, Fairways Magazine (@FairwaysMag): The average driving distance on Tour has increased by more than 30 yards since Nicklaus designed the course in the mid 70’s, rendering it almost defenseless to today’s bombers. The three reachable par fives on the back nine force players to dial in a “go low” mentality, which is exciting for golf fans, even if it doesn’t appeal to all the players. Lots of great memories but definitely time to move on.

Dustin Johnson’s win at the RBC Canadian Open was the 19th of his career and third this season. Some of his career records are putting him into conversations alongside Jack Nicklaus and Tiger Woods, yet he is rarely considered a dominant player like they were, despite his World #1 ranking. Does DJ get the recognition he deserves?

Deeks: A good question, and I’d say the answer is no.  But DJ simply hasn’t earned the fans’ respect, nor, I suspect his fellow players.  Past “personal issues” (of which we all know the cause), indiscretions with at least one other Tour wife, his ostentatious marriage to the selfie-obsessed daughter of Canada’s super-hero hockey star, and an apparent attitude problem with kids and galleries off the course… have all kept DJ from acquiring much popularity.  And popularity can certainly add to your level of respect.  So, no, he doesn’t get it, but yes, he does deserve it for the quality of his talent.

Kaplan: DJ should not be put into any conversations with Jack and Tiger. He isn’t even close to that level. The modern era of golf is measured solely by majors — like it or not — and the last time I checked, DJ has only won one of those! That’s fewer majors than Brooks Koepka, Bubba Watson, and Martin Kaymer have earned, just to name a few! Don’t get me wrong… DJ is spectacularly talented and easily the best player on the planet. He just doesn’t win enough of the big events to be anointed an all-time great.

Quinn: There’s something about his laconic nature that doesn’t project dominance. Heck, he’s won 10 times in his last 43 starts. Still, he has to keep that going for a good while longer to be a permanent part of the conversation with Jack and Eldrick.

Mumford: Somehow in the search for a successor to Tiger Woods, everybody skipped over DJ and went directly to the under 30 crowd. DJ has Hall of Fame credentials already, but his sole major is likely what holds him back from the recognition he deserves. Even the other Johnson (Zach) has more. Also, DJ has had a penchant for self-destruction, both in majors and his personal life. Hopefully that’s behind him. Nobody on Tour has more talent and DJ has at least another ten years to add to his resume. That should eliminate any doubt about how good he is.

The Tour moves on this week to Firestone Country Club for the WGC Bridgestone Invitational. Tiger Woods has won there eight times and comes into the tournament following a near win in The Open Championship two weeks ago. How much will past success at a course influence current play and is it enough to propel Tiger to his first win in 10 years?

Deeks: You’d have to say Tiger would be the primary force to be reckoned with, based on familiarity with the course and past performance.  His comeback this year has also surely exceeded all but his own expectations.  But Tiger is not the indomitable intimidating force he once was, and as we saw at Carnoustie and elsewhere, his rise up the leaderboard does not guarantee a whimpering collapse by those in front of him, as it did a decade ago.  So, unless he jumps to an early and big lead after Round Two, I’d say it’s still anybody’s tournament even if he’s in the final mix on Sunday.

Schurman: Tiger is like a first-year rookie! He is going through the exact career path as someone beginning their career on the PGA Tour. He has missed cuts mixed with high finishes, low scores, high scores, great ball sticking, inconsistent putting etc. All the trials and tribulations enjoyed by a rookie. He also has high finishes but can’t close the deal; just like a rookie! In his own words “All I have to do is put myself in position often enough and good things will happen”! He’s right but so far he has ‘spit the bit’ every time and will continue to do so until he becomes comfortable in the situation and learns how to win again.

Kaplan: I don’t think Tiger’s past success is going to help him much this week. Tiger’s brilliant play at Carnoustie was predicated on iron shots off the tee that rolled out a million yards. He’s going to need to hit the driver this week to contend. So, let’s take a look at some of Tiger’s driving stats from this year, shall we? He’s 166th overall in driving accuracy, 169th in total driving efficiency, and 193rd in distance from the edge of the fairway. I just don’t see it happening this week, folks.

Quinn: In theory it should help Eldrick a lot. But he now has a different body, a slightly different swing, and a different game from his glory days in Akron. It may help him get entirely too much face time on CBS. But sadly for the mouth breathers in the gallery, the young guns will be in Ohio too.

Mumford: The most exciting aspect of the Bridgestone Invitational will be a Tiger Woods – Dustin Johnson rivalry. Tiger is coming off a great performance at Carnoustie and armed with tons of experience at Firestone, looking to get back in the winner’s circle. DJ is fresh off his RBC Canadian Open win and ranked #1 in the World for good reason. It’s unfortunate that these two never had much chance to go head to head when both were at the top of their game. Maybe this weekend will give us a glimpse of what might have been. The stats all favour Johnson but one should never underestimate Tiger’s desire. This could rival Ali – Frazier as a heavyweight bout for the ages. Too close to call.