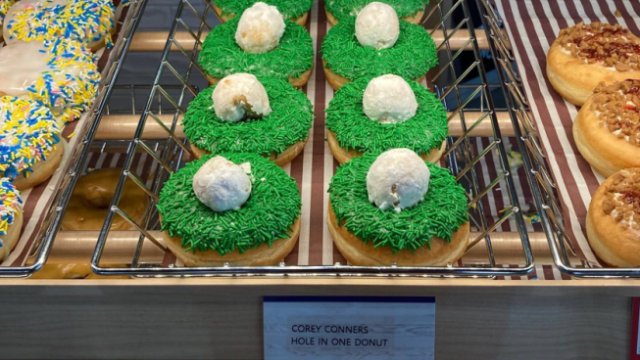 Corey Conners gets his own Tim Horton’s donut

After local boy Corey Conners made a hole-in-one at Augusta National’s 6th hole during third round play of the Masters, the Tim Horton’s in his hometown of Listowel commemorated the feat with a special donut. It’s covered in green sprinkles and has a white golf ball (Timbit) in the centre.

Congratulations to Corey Conners (Listowel) for his T8 finish at the Masters last week. Also, to Mackenzie Hughes (Ancaster) who finished T40.  Both players are in the field this week for the RBC Heritage at Hilton Head, SC. They’ll be joined by Michael Gligic (Burlington) and Adam Hadwin and Nick Taylor, both from British Columbia.

On the Korn Ferry Tour, #3 ranked Taylor Pendrith (Richmond Hill) tees it up at the MGM Resorts Championship at Paiute in Las Vegas, NV. Adam Svensson (BC) is also in the field.

Brooke Henderson (Smith Falls) will be looking for her third straight title at the Lotte Championship as the LPGA resumes in Hawaii. Also in the field will be Alena Sharp (Hamilton), Jaclyn Lee (BC) and Anne-Catherine Tanguay (QC).

Finally, Aaron Cockerill (MB) will be teeing it up in the Austrian Golf Open on the European Tour this week.

Good luck to all!

Sad to hear of the passing of long time PGA of Canada professional Alan Ogilvie on April 1 at the age of 91. During his long career, he held positions as either the Head Professional or General Manager at Lambton, Glen Abbey, Lionhead, Angus Glen and Spring Lakes. Click HERE to read the full obituary.

The Tokyo Olympics are just 100 days out and all indications are the Games will get the green light to proceed after being postponed due to the Corona virus pandemic in 2020. Canada’s golf team will include two male and two female golfers based on World Rankings. As of this writing, those players would be Corey Conners (#42) and Mackenzie Hughes (#51); and Brooke Henderson (#6) and Alena Sharp (#113). Final qualifying for the Olympic Golf Team concludes on June 21 for men and June 28 for women.

How much is a Masters win worth?

It’s not even a week since the final putt dropped at the 85th Masters but speculation is rampant that in addition to a big fat winner’s cheque (US$2,070,000), a trophy and a green jacket, Masters Champion Hideki Matsuyama could be in line for some really serious money in his home country of Japan. The Japanese are already golf-crazy, and Matsuyama’s win just ratcheted things up a few more notches. Sponsors are said to be lined up to make pitches to Matsuyama’s management group and it’s estimated that endorsements and sponsorship deals could top US$20 million a year for the next 25-30 years. That would make a Masters win worth over half a billion dollars. Yikes!

Peter Mumford
Peter Mumford is the Editor of Fairways Magazine. He's played over 500 different courses in 21 countries and met some fascinating people along the way. He's also a long-suffering Toronto Maple Leaf fan.