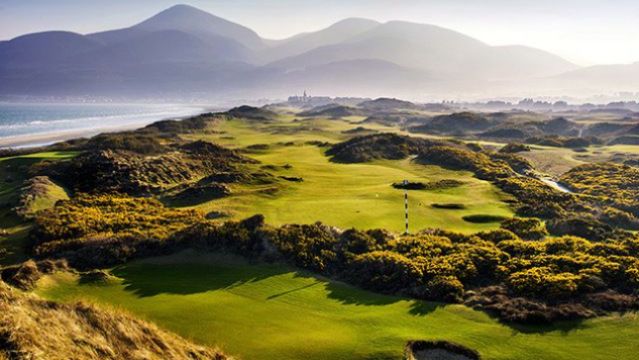 This story originally appeared in Fairways Magazine in 2013.

It may stem from the fact that the family’s gnarled roots first took sustenance in the green rolling hills of County Armagh. Yet, for generations, any reference to the olde soil was clearly Ireland, with no borderline or troubling mention of the North. Still, it was unavoidable during familial gatherings that there would come a time and place when the game itself was the right and true topic, and it could not pass without the mention of Royal County Down.

Whatever misses and matches fateful genetic mixing have wrought, to paraphrase the Paddy’s Day T-Shirts, you don’t have to be Irish to fall inexorably in love with a stunning, beguiling, intemperate, fickle, unforgiving, gorgeous, penal, generous, endearing, and simply unforgettable golf course.

Royal County Down, Newcastle, Northern Ireland was on the bucket list before the term gained currency, and mainly for the dinner table references but also for the cadence and implied grace of the name. Of course, the reality far exceeds any imagining.

To fully appreciate the experience – other than renting a place in town and being totally seduced by its special charms – the night before the round should be spent at the Slieve Donard hotel. This magnificent Victoria structure is closing in on its 120th birthday. It commands the shoreline on Dundrum Bay and all your attention in the stunning lobby and gracious suites. Best of all though, is the few minutes walk from the hotel’s back garden ( bag on your back)  through the wrought iron gate to a hedge-lined pathway leading to one of golf’s finest experiences. 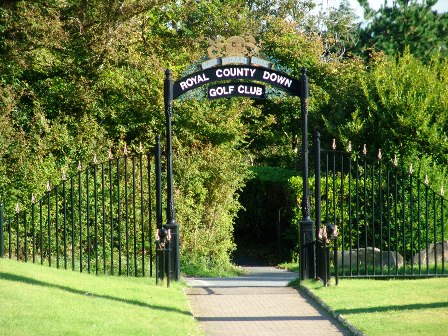 When the walkway from the Slieve Donard makes its final turn to the right, the first impression of Royal County Down is stunning. The 15-20 ft high hedge, running a good 40 yards, is so precisely trimmed it puts a T-square to shame. Then, the gradual easing into the entrance allows the first reveal of the Tudor clubhouse, manicured flowerbeds, and lawns that shame most private club greens. The first tee? It’s way over there towards the Bay, past the two massive putting greens, by the shed with the pedestal faux Rolex watch reminding digital-age golf-swing app iPhone carrying interlopers that real games can be played here.

The four-hour seduction begins on that first tee and only intensifies as the round progresses. The massive dune crosses the fairway at about 150 yards and simply invites players to play away to the distant and unseen target, implying that a well struck, precise, and straight shot will be rewarded – not generously – but it will at least be acknowledged. And so it goes, from one gloriously challenging hole to the next.

A grand course like Royal County Down should not be played in aberrant weather. Yet, such was my experience. For all but two or three holes, the sun shone, the wind was light, and the town sparkled on the distant hills prompting everyone in the group to wish they had a tripod and a better camera than their phone. Still, each and every hole, from all tee boxes, required thoughtful club selection and each player’s best shots to threaten par.

For all the right reasons, Golf Digest ranks Royal County Down as the best course outside the United States. The ranking may be recent, but the course dates back to 1889. Tom Morris (before he was saddled with the ‘Old’) set out the first trial, and over the decades some nuances have been added by other legends – Harry Varden, James Baird, and Harry S. Colt. Donald Steele added bunkers on 18 in 1997, and recreated #16 in 2004.

The name was part of the fabric of childhood, mysterious really and like most childish things, unreachable. But, now that I’ve played Royal County Down once, it goes right back to the top of my Bucket List.

Hal Quinn
Vancouver-based Hal Quinn is a golf and travel writer, columnist, and author who has diligently been trying to shorten his backswing since late 1992.

One thought on “The magic of Royal County Down”