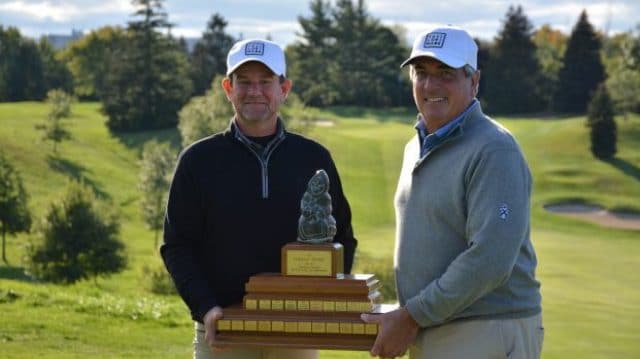 Brampton, ON – In dual coverage of action for today’s championships, the Ontario Senior Men’s Better-Ball Championship took to the prestigious course at Brampton Golf Club for an 8:00 a.m. start this morning. With just 18-holes of competitive stroke play to determine the 2021 champions, the Toronto Golf Club’s David Wilson and Eamonn McConnell come out on top.

Taking home the championship title with a stellar round of 67, Wilson and McConnell battled the field to win just one-stroke ahead of a tight leaderboard. Silver medalists, Jay Campbell and Scott Hepburn (Oaks G&CC) held off a pack of third place winners with a smooth three-under 68 total. In the bronze medalist position we had a tie between six teams, consisting of the following; Phil Charal and Tony Robinson (Summit G&CC), Gawain Robertson and Jack Moussaoui (Cataraqui G&CC), Mark Kalbfleisch and Brad Stumpf (Oshawa G&CC), John Saffran and John Zdonek (Pointe West GC), Brian Humphrys and Rick Robinson (The Pulpit Club), and Bruno Ardito and Gary Parker (Brampton GC Ltd.).

In the post win interview, Wilson expressed that the win “feels amazing considering I grew up here at Brampton. I worked here as a kid, played a thousand rounds of golf, and left a number of years ago, so it was a real thrill to come back with my good friend Eamonn. We got it around with a good ‘ham and egg’ today.” McConnell added “it was my first time playing Brampton, so it was a real treat. It’s a great golf course and we both played really well. I was in the water twice, while David’s putting for birdie. We just played really well that way, where one of us was in good shape on just about every hole. We made some good putts, had four birdies, no bogeys which is the key to the game, and we just played solid golf. It was fun!” Representing the Toronto Golf Club, McConnell expressed that while playing a lot of individual golf, “it’s great to play as teammates. Our reaction today was definitely a little surprised.” Wilson concluded the interviewing by adding “I’m especially happy because, as we just joked earlier, this is my rookie year as a senior, just having turned fifty-five last year. It’s really special coming here with my good friend to represent Toronto GC and have that bridge between my history here at Brampton, and taking the trophy home to our home club.”

To view the leaderboards from the 2021 Ontario Senior Men’s Better-Ball Championship, click HERE.